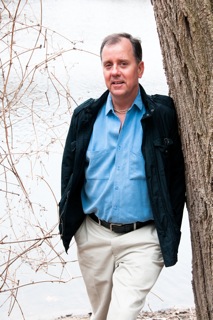 To say that Michael Hoare has had a difficult life is a colossal understatement. Before he was old enough to vote or drive or drink or even shave, Michael experienced enough trauma in his young life to fuel a lifetime of therapy.

Michael Hoare, D.D., is an author, minister and certified Spiritual Therapy Practitioner. His past life has been filled with challenges. He was born with a hole in his heart and experienced high levels of trauma during his childhood. He turned to alcohol and drugs for comfort which resulted with him being homeless in the New York City subway.

In addition, Michael has lost an unusually large number of loved ones to death: both parents by the time he was 16, his best friend 2 years later, his younger brother the following year and his fiancée died two weeks before their wedding date. Eleven months after his fiancée died, he learned that his daughter was battling cancer. Thankfully she survived.

Despite it all (and maybe because of it), Michael can talk about his troubled past and how he came through it, thanks to the spiritual recovery program he founded called Ah-Man.

Michael has a wealth of experience and expertise in healing his own life and helping others attain their own healing. He is the author of “Returning to WHOLENESS… Discovering Ah-Man,” a book that chronicles his journey to spiritual recovery and redemption.

Although his journey was full of stops and starts, he has maintained his sobriety for over 30 years. He has dedicated the past 28 years to helping others free themselves from their repetitive cycles of self-destruction by teaching them how to use the foundational elements of Trust, Forgiveness and Acceptance through the Ah-Man Spiritual Recovery Program.

Central to the Ah-Man experience is being able to forgive one’s self and to forgive others for past misdeeds. The experience that Michael, a recovering alcoholic, describes in his book are due in large part to the impulses of what Michael terms “primordial man.” While primordial man is not a bad guy, his actions are the result of instinct rather than heart. Primordial feelings include anger, fear, resentment, control, lust, jealousy and suspicion.

In order for Michael (a New York City native) to connect to Ah-Man, he had to change his habits and beliefs and ultimately surrender to them. That he explains, is not an easy task. Why? Both men and women, he says, are conditioned to conform to society’s expectations. For men, it could mean feeling the need to have the highest-paying jobs, purchase the largest homes and maintain the lifestyles to match. For women, it could mean being just like men or looking and acting a certain way, e.g. thin or sexy.

With Trust, Forgiveness, Acceptance of ourselves, God and others, Michael believes that men and women can find a spiritual way of handling everyday life situations without getting sucked into them.

Through a series of retreats and one-on-one counseling sessions, Michael teaches men and women of all ages to embrace the Ah-Man within them by creating: loving relationships with one’s self, God and others; openness with other people; a asense of integrity and the ability to communicate… All by incorporating Trust, Forgiveness and Acceptance, thus allowing them to attain spiritual recovery and wholeness.

Michael is a prolific writer. He is in a wonderful fulfilling relationship, is the father of three blessed adult children, is the grandfather to an amazing granddaughter and currently lives in Ossining, New York.

His latest book, Returning to WHOLENESS…Discovering Ah-Man, is now available at Amazon.

Additional information about Michael Hoare and the principals of Ah-Man can be found at the Ah-Man Blog.